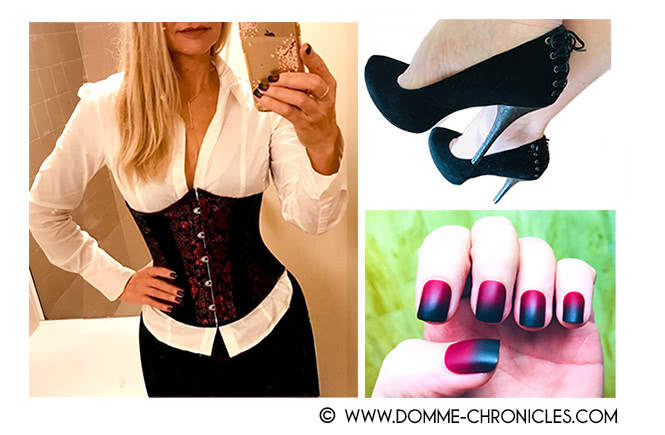 © 'I rocked that corset' By and of Ferns

We agreed they’d be here at 7pm, these six kinky strangers who I’d never met. It’s still light at 7, and despite a cyclone off the coast, my deck held shelter, and views towards the beach, and not enough chairs.

I’d dragged up a ‘danger chair’ from downstairs: My outdoor setting is standard fare, some kind of steel and glass, and they rust like a bastard within a year. Moist salt air constantly being blown in from the sea is relentless in its quiet destruction. Everything rusts here. The danger chair’s legs are uneven, the bottom of them literally eaten away by rust. I’d taken it downstairs to get rid of it some time ago, so resurrecting it was an act of faith. No-one was allowed to sit in it.

“Oh wait! I have to warn you about the ‘danger chair’!”

They’d already spotted it though, wobbling precariously on rust-eaten stumps.

“This one?” someone laughed, giving it a shake.

That was my chair. Just in case there was some terrible collapse. I’d thrown it around on the concrete floor of the garage earlier to see if I could break it. Despite the damage it seemed sound enough. It seems right that an introvert would not have enough chairs for a group of seven, seemed kind of fitting I’d be in the danger chair.

My guests generously brought champagne and chocolate and delightfully friendly smiles. I brought out the snacks I made and we sat out on the deck with drinks, the ‘getting to know you’ conversation interspersed with entertaining stories of both kinky and vanilla adventures these folks had had. They had the easy camaraderie of long term friends and loving couples, and I felt privileged to be included. Time flew quickly.

I was lucky that one of the lovelies was an experienced corset maker and fitter, and he helped me with mine, loosely doing it up for the quick drive there, then tightening it for me at the venue while I hung onto the belt of a willing man, the tugging of the laces transferring towards the front like some mini-conga line.

Once we got there, we were given a tour of the venue. It’s large and beautifully outfitted, some big spaces for lounging, for shows, open areas set up for play, and many compartmentalised themed play rooms (a wet room, a medical room, a vac-bed room etc).

My companions knew a lot of people, so of course were doing a bunch of catching up, and at some point I wandered off and ended up on the main floor, quietly people-watching and low-level hunting.

It was quite a surprise that at different times I was approached by submissive men who I briefly dated, sweethearts who I’ve mentioned on this blog, and with whom there wasn’t that spark to make anything of it, no-one’s fault. They came up to say friendly hellos and have ‘how have you been’ type chats. It was really lovely. It was also funny to me because I date so infrequently that those men might just be 100% of all the local men I’ve met up with in the last few years: Then I go out one time, and there they all are like ‘ghost- submissives of dating-past’ :D. The community is small, yo!

As with these types of events, if you aren’t playing, there is watching or talking.

For the watching part, there were some shows, as there often are at big events. I watched a beautiful choreographed rope performance, and part of non-kink novelty show (sticking scissors up noses and fire swallowing etc).

There was also play of various kinds to watch, of course.

I’m not so interested in watching play for the most part, though a punching scene grabbed my attention (there’s something so visceral about punching that I love), and I was curious about the vacuum-bed so had a peek at that, though for obvious reasons it’s not all that entertaining after 5 minutes. I quite enjoyed some of the more intimate play I saw happening between people quietly and without fanfare. Someone being used as a stool, another giving a foot massage, one offering impeccable ritualised service, someone being led around on a tight leash. Sweet.

I had brief chats in passing with some cutie pies, but only approached one specifically because I liked the look of him. Tall, dark hair, glasses, sharp jawline, conservatively dressed for a ‘back to school’ night, standing on his own and quietly observing the crowd. I sidled up and complimented his outfit, joked about his appeal to the ‘higher education’ crowd in a graduation gown. I was delighted to find that he got my sense of humour, so when I made a ridiculous statement offering him $15 for his virginity (ridiculous because it clearly wasn’t worth that :P), he picked it up and ran with it without batting an eye, and I love that.

I caught up with him again before I left and asked for his Fetlife nick, because this is the way of the modern world. I looked him up of course: He is not submissive *sad face*. He’s not NOT submissive either. Ha! He also seems quite a bit younger than I had initially thought so I might be falling into ‘creepy old lady’ territory. I haven’t heard from him so it doesn’t matter much. Oh well. We can still chalk one up for the whiners who say that dominant women never approach men, so job done amirite?! *dusts hands*.

I reached my limit of peopling after a few hours. I took a break in the lounge downstairs to see if I could quickly recharge enough energy to get a second wind. I couldn’t. I was done.

I took my leave around 11 or so I guess, and headed home. It was raining when I left. I slipped my shoes off, and ran down the road to my car, the cold bitumen a relief for my hot and tired feet.

All in all, I’m really glad I made the effort. The folks I invited over were completely delightful, and the people at the club were friendly. It was a positive and welcoming party atmosphere.

I made a mistake with the shoes, by the way. Don’t get me wrong, I love them, but I haven’t worn heels for a long time, and there was a lot of standing around, like hours worth, and I felt their pinch keenly. And when I say ‘pinch’, I mean repeated stabbing pain.

If anyone needed a foot massage after all of that, it was me!

Another chat with me!

When vanilla and… not… collide