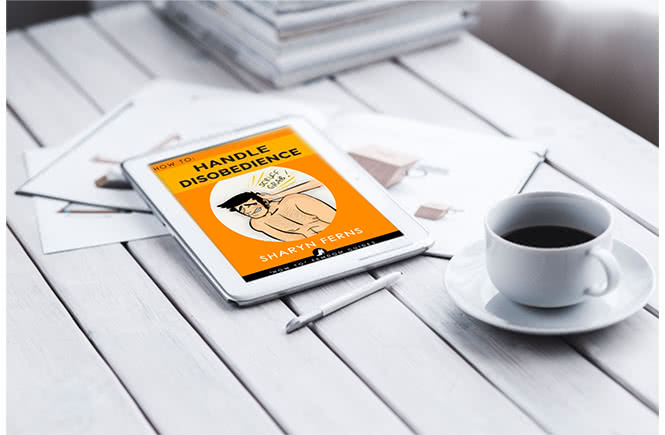 A blog post by Die Starke Frau prompted me to write this response because I see in her writing a struggle that a lot of new Dommes have: What do you do when your submissive disobeys?

One thing that definitely throws me off balance is when the man is refusing to submit. When I develop an idea of what to do with him and how to fuck with his mind, and if then, out of the blue, the man does not obey.

Note: I am not talking about playful disobedience here. I am talking about a serious refusal. No joking around, no fun. Just a “Nah… this does not turn me on. This is not hot to me. I am not interested in doing this/ or getting this done to me.”

It’s a great question… what if he just says ‘Nup, don’t feel like it’?

I want to be perfectly clear up-front: A submissive has the right to say ‘no’ any time they want for any reason. They’re withdrawing consent, and their ability and right to do that is a fundamental tenet of consensual D/s and is always true. It is also true that when they say ‘no’ to things that fall well within your mutually agreed dynamic, there is a problem in your D/s relationship that needs to be addressed. Both of those things can be true simultaneously, and this writing is about addressing that problem.

In the fantasy world, the answer to this is simple: you slap him across the face and hiss, “Go do it NOW!” and he will leap up and run to do your bidding, abjectly chastened with the awesomeness of your power (yeah, that’s hot, try it in a real relationship and see how that goes… come back and let me know…).

In the real world, and assuming a full time romantic D/s relationship, the answer is much more complex, and to get to it, I have to go back to the beginning of how I build a relationship for context. 1

In the early stages, I’m just getting to know a man who seems interesting. And if we are right for each other, this gentle dynamic starts to filter in. I’ve talked before about D/s flirting and that’s exactly what it is, it’s fun and playful and zing-making. We are feeling each other out.

He might roll his eyes at something silly I have just done.
I laugh and look shocked. “Did you just eyeroll at me?!”
“Um… yeah… I was just kidding, really… um… sorry…”
Maybe he blushes, maybe he is made shy by being called on it, maybe he smirks. We both recognise the moment.
I might act indignant. “I should think so!”
There is a little frisson in it, a hint of sexual tension and hotness, a recognition of each other.

If that little exchange (and every other bit of D/s flirting that I initiate) doesn’t work that way, doesn’t feel sweet and sexy and natural, doesn’t draw out his submission in the way I need it to, then he is not right for me.

That is how we build the dynamic. In small ways. Gentle nudges, warm reactions, hot little push-pull.

By the time we get to the point where we ‘formalise’ the relationship, he would be no more likely to disappoint me by saying ‘no’ than he would be to smack me in the face. If I can’t get him to that point, if I do not know that he is at that point, then we are not ready for this relationship, and maybe, we are just not suited for each other.

Having waxed lyrical about all that and how lovely it is, I have much more to say because in all of that, I am setting the groundwork and not actually answering the question “What if he just says ‘nup'”. I’m getting there, I promise…!

Whatever your expectations are (on both sides) make sure you each understand them. Obedience for me is key, and if he doesn’t understand that, then I have failed to communicate it properly.

When I enter into a relationship, when it becomes an agreed D/s dynamic and we discuss it more formally, one of the things I often say is this:

It really is that easy, and it’s true, because by doing that, he is withdrawing his consent to being in the dynamic and no matter what anyone says, I cannot MAKE anyone submit to me if they genuinely don’t want to.

In my relationships, this is a signal that there is something really wrong. It is the vanilla equivalent of him saying ‘Fuck off!’. It is hugely hurtful and awful and I completely understand why dominants struggle with it.

Firstly, you know him, I don’t, so I can only speak from personal experience. Underlying all of this is ‘you have to know him’. If you want a man who has finished a 16 hour day of manual labour to go and clean out the garage at 10pm at night, then you better be bloody sure you know how that will impact him. For some men, it might be a blessed stress relief, for some it might be a signal of love, for others it might be a ‘what the hell is wrong with you?!’ moment. You need to know this even if (especially if) you decide to tell him to do it anyway.

I am assuming in this scenario that the request is reasonable and within the bounds of the agreement.

The first thing I would do is clarify that he is seriously saying ‘no’ because he would know what a big deal that is, and then I would want to know whether he had some reason that I am missing.

(best case, this is all it takes, he looks up sheepishly, goes ‘Eep, sorry Ma’am’ and runs off to do the thing… He has a few chances in this dialogue to change his mind. So let’s continue with ‘worst case’…)

(as a side note, seriously, if that happened to me, I would faint with shock… who the fuck is this person and what the hell is he doing in my house?!!)

“Is there a particular reason why you are saying ‘no’ to this?”

(again, another chance here for him to think about it and change his mind, or to explain what is going on with him (and there might well be a valid ‘why’ that I haven’t understood)… Continuing, though, with the worst case…)

“If you are saying ‘no’ to me, we have a serious problem here. You understand that, yes?”

“No, it’s not okay, I’m hurt and angry, and we will discuss it later.”

I say ‘later’ because right now, he is being a petulant child and you are likely so hurt and confused that you aren’t seeing straight. Having a fight about it is not productive.

But don’t let it go.

Later, when you are calm, talk to him about why this is important to you. Ask him why he said ‘no’, what his submission means, what he wants out of it, what has changed and *listen* to the answers. Explain how this makes you feel, that you can’t ‘be the Domme’ if he refuses to submit, that it hurts your feelings, that his saying ‘yes’ is the cornerstone of your dynamic. Have him reiterate how he sees his submission working.

At this stage, either he ‘gets it’, or something has changed and he no longer wants to have the dynamic that he agreed to. If it’s the former, then you have reiterated your agreements and you move on with it (hopefully) resolved.

If it’s the latter, and he really no longer wants this, then you need to reassess where you are, and maybe redefine what your relationship looks like.

It’s perfectly valid to change how your dynamic works based on changing needs, but many new dominants will compromise away all of their power (and happiness) to please their man and can end up only ever doing the things he likes when and if he feels like it, and then wondering why it doesn’t feel like dominance. Keep hold of your desires in the relationship.

If you have somehow diverged so much that you can’t come to a new agreement, then perhaps this signals the end of your D/s dynamic and you need to decide if your relationship can go forward without it.

I’d be very surprised if one ‘No’ led to such a discussion, but perhaps it has been a series of ‘Nos’, or perhaps this is the only way he has been able to communicate that he is having serious issues with the relationship.

I think some submissives cannot get their head around the fact that D/s takes two people. As a dominant, I CANNOT be second guessing whether he will do what I want or not, I need to trust him to submit. If I can’t trust him, it leads to a headspace that looks like this:

“Should I ask him to get me some water? What if he says ‘no’? He looks pretty comfortable, maybe he won’t want to get up. Ahhh, he’ll say ‘yes’, I’m sure he will. Maybe he won’t… what if he doesn’t. Ahh, hell, I’ll just get it myself, I don’t want to fight about it.”

IMPORTANT NOTE: Do not let it go.

I know full well that the ‘FFS, it’s only a glass of water, get it yourself, just this once… God!!’ argument from him will sway many dominants and they *will* go ‘Yeah, maybe he’s right, I’m making a mountain out of a molehill’, but the point is not about the glass of water. The point is about whether he will or will not submit to your authority, whether he will or will not honour his part of the agreed dynamic.

I can guarantee you that letting it go will cause more problems in the long term. Why? Because then you are being inconsistent, and being inconsistent in asserting your authority will erode it as surely as if you just said,

“Can you get me a glass of water, please… I mean, if you feel like it… if you don’t feel like it, that’s okay too… never mind, I’ll just get it myself…”

If you end up there, both of you are likely to find yourselves frustrated and unhappy and wondering how the hell that happened.

So in summary (I’m providing Cliff notes, I’m good to you!):

If you have to keep repeating 3 and 4, your dynamic as it exists now is pretty much toast. Live with that fact, renegotiate from the ground up, or walk away.

1 To pre-empt the inevitable, this is how it works for me in the very particular type of romantic D/s relationships that I have where obedience is a cornerstone: it is is my personal opinion, I am not the arbiter of Truth or the Oracle. If this helps you at all… great! If it doesn’t, that’s okay too. If you deal with this issue by smacking him over the head with a smelly fish and screaming “I’m a little teapot” and it works, then that’s awesome! and etc…

Edited Dec 2019: Since writing this, I got so many questions that I published a practical, actionable guide,’How To Handle Disobedience’, to look at this issue more closely and expand on the advice given here. The guide provides much more context, and lays out a clear structured step-by-step process to follow to tackle this really common challenge. 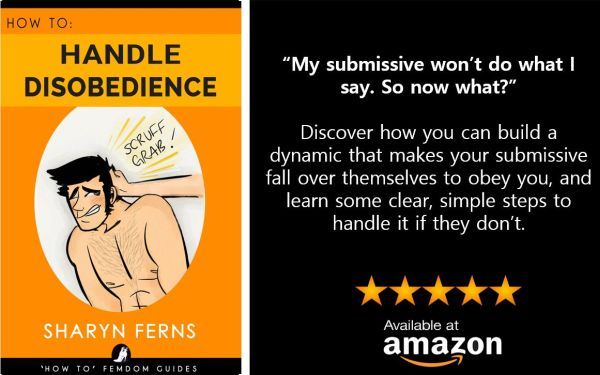 Amazon US | Other stores

Reader Q&A: Am I being scammed? 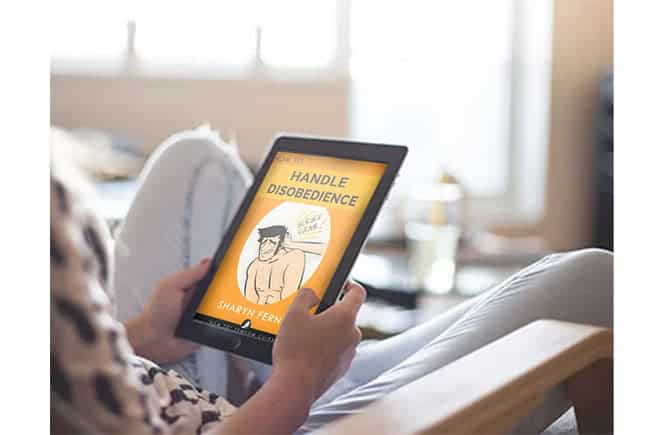 How to handle disobedience