Now we all know (don’t we, gentlemen?!) that approaching a dominant woman who you don’t know with a list of kinks that you would like to have done to you is inappropriate, as is asking to be her submissive/slave, asking her to train you, asking to serve or worship her, or telling her how she should dominate you, what she should wear, what she should say and how she should behave while doing it and etc.

I don’t know what happens, but somewhere between “Wow, people just like me!!” and “Hello GoddessSupremeOne” some smart, well meaning, kind, lovely men lose their minds. New and shiny submissive men, this is for you!

Dominant women looking for a submissive are women seeking a relationship. While the relationship may be of a different kind than you are used to, and there are many many variations in the detail, it’s still a relationship, and it’s generally an intimate and personal one that a woman will have with someone with whom she has a strong connection on many levels, someone she truly likes and enjoys.

Approaching a woman who you don’t know with an offer of your submission is akin to saying to her “I don’t care who you are, you labelled yourself a Domme, so you’ll do”. In the same vein, emailing her with a list of your kinks is akin to “I want some lady to touch my junk, you’re a lady, here’s all the ways you can make my dick hard”. It doesn’t take much thought to see how wholly unappealing that is.

It makes her feel like you are looking for a female body to fit into your fantasy, that you will submit to any female-identified person (would you? if so, I would have a think about that), and that devalues both you and her.

Dominant women are bombarded with those offers day in and day out… mostly from wankers, but also from men who are somehow misguided into skipping all the steps that it takes to court a woman with his charms (being sweet, smart, funny, having sparkling conversations, discovering common interests, getting to know each others quirks, going out on dates, sharing a sense of humour, flirting madly etc etc… normal relationship stuff). They go straight for the “Here I am, ready to be submissive and do all the kinky stuff… you can have me for free!” and somehow think that’s going to work (trust me, it won’t!).

Most dominant women (I really really want to say *all* dominant women, but can’t, because it takes all sorts) are not interested in “a submissive”, they are interested in YOU… You, the man… You, the fun, interesting, unique individual who happens to be submissive. I have never met a dominant woman who says “Yeah, he’s a jerk, and boring and we have nothing in common… my god, he’s insufferable! But he’s a great submissive!” It doesn’t work that way.

My advice to you – don’t suddenly forget everything that you have learnt about women and relationships because you think you are somehow in an alien world where normal rules don’t apply. Treat communication with her like a normal social interaction with a woman who you want to get to know, who you want to impress, who you want to *like* you (YOU, not some strange ‘uber-subly’, offer-yourself-to-strangers type version of you).

All the social rules of relationship building stand in this strange new world, so deliver.

Edited to add: I’ve written a book, How to find a dominant woman, to help new submissive men out with ALL of this and more. Get it, do the things. 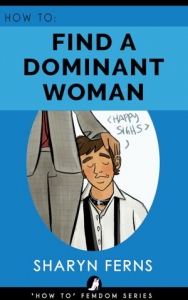 PSA: Some dominants are arseholes