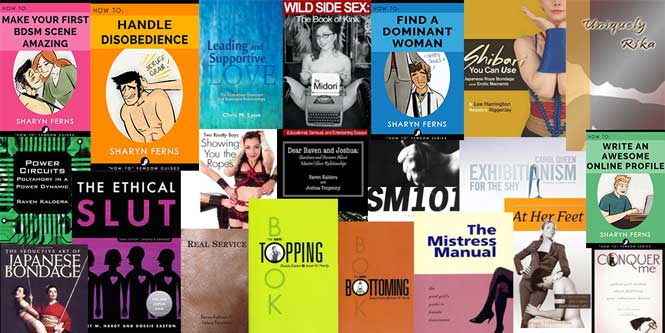 PART 2: Not My Thoughts:
D/s and M/s Relationships: An Annotated Reading List

-reposted from SexGeek with kind permission from Andrea Zanin*

*Some content edited out for brevity, please see links above for the full, unedited version

General (for both sides of the slash)

It’s unfortunate that two of the three books I’ve read that provide personal accounts of slavery/full-time submission are both highly problematic. The following two are valuable reads if you’re looking for what NOT to do (and also for a sense of history):

… But this one is great!

Screw the Roses, Send Me the Thorns : The Romance and Sexual Sorcery of Sadomasochism
by Philip Miller, Molly Devon, William A. Granzig
Screw the Roses enthusiastically covers all the basics and even some of the not-so-basics–bondage, negotiation, sex, endorphins, dominance and submission, toys, safety, S/M community, and beyond. It’s written primarily from the point of view of male dominant/female submissive interactions, but it’s easily translatable into valuable advice for any relationship configuration.

The Loving Dominant
by John Warren
The Loving Dominant is one of the basics. It should be–and often is–required reading before a new partner is willing to consider playing. It covers not only the how-to’s, the who’s, the what’s and the when’s, but the why’s, as well as providing some great inspirational examples of scenes.

The Topping Book : Or, Getting Good at Being Bad (Ferns note: There is a revised version: The New Topping Book)
by Dossie Easton, Catherine A. Liszt
This is book was a very fun and informative read. It talks about the rights and responsibilities of the Top and what it is like to be a top. It tells you that Tops and bottoms are equals. Dossie and Catherine are always very good about including all genders, preferences, and relationships.

The Bottoming Book: How to Get Terrible Things Done to You by Wonderful People (Ferns note: There is a revised version: The New Bottoming Book)
by Dossie Easton, Catherine A. Liszt
Catherine & Dossie give us another great book. It is short and concise and very helpful. The sections on the psychological effects are particularly well explained. The authors repeatedly validate the experience of the person-as-bottom, whether that person identifies solely as a bottom or as a top who desires to experience bottoming, or as the in-betweener who likes it all.

Different Loving : The World of Sexual Dominance and Submission
by Gloria G. Brame, Jon Jacobs, Will Brame
They begin by asking “What is normal ?” and note that if “normal” means reproductive relevance as in the Victorian standard, then few are normal. What is clear is that what is painful for some is pleasurable for others, what is unacceptable for some is delightful for others, what is frightening for some is a natural high for others.

Bound to Be Free : The SM Experience
by Charles Moser, J. J. Madeson
Of the vast array of human sexual behaviors and practices, sadomasochism (SM) is probably the least understood and, thus, the most feared among the general public. Moser and Madeson here provide perhaps the first intelligent, fully informed, fact-based discussion of what SM is, what it means to its practitioners, how it is practiced, and the structure of its subculture in contemporary American society.

The Leatherman’s Handbook: Silver Jubilee Edition
by Larry Townsend, Jack Fritscher
A good introduction to the gay male SM world of the early 1970s revised briefly for the 2000 edition. It gives a good basic overview of the history of “Old Guard” as well as insights into how different from and similar to gay SM s from het SM.

Exhibitionism for the Shy: Show Off, Dress Up and Talk Hot
by Carol Queen
Carol Queen is absolutely the best. She makes sense out of feelings most people share but are afraid to admit. You should read this little book, especially if you have any shy tendencies. We would all live fuller lives if we could follow half of her truths.

Learning the Ropes: A Basic Guide to Safe and Fun S/m Lovemaking
by Race Bannon
Race Bannon provides some much-appreciated accurate information in this honest and straightforward basic guide to S/M. He explodes prevalent myths about S/M and replaces them with a playground of erotic fantasy and an emphasis on consensuality. Possibly the most important trait of this book, though, is that it’s delightfully devoid of the “This is the One True Way” trap evident in too many sexuality manuals. Delightful examples of questions and issues that commonly come up during negotiation, useful for both the novice just learning to say yes, and the more experienced hand who has met a new partner. The chapter on “S/M Technique” includes good basic safety and sensation information. A recommended reading list, and a glossary. –Cheryl Trooskin

Sensuous Magic 2 Ed: A Guide to S/M for Adventurous Couples
by Patrick Califia-Rice
Need help with your riding-crop technique? Wonder how to wrap your husband like a mummy? Sensuous Magic has the answers. Writer, therapist, and sex radical Patrick Califia-Rice has updated his classic introduction to S/M and power play to embrace couples of all persuasions and at every stage of experience. Although not a comprehensive technical guide (you will need a book on rope bondage, for instance, if you want to learn appropriate knots and techniques), Califia-Rice’s text offers insightful warnings, advice, and commentary, the kind of guidance you might expect from a seasoned mentor. It is especially well-suited to daring beginners, who can learn the basics on safety and communication, while being titillated by more advanced topics like whip selection and master/slave contracts. –Regina Marler

The Seductive Art of Japanese Bondage
by Midori, Craig Morey
Midori shows step by step how to achieve beautiful and exciting Japanese bondage on a variety of genders and body types. Each chapter starts with a spectacular, tasteful full-color photo of the finished bondage pose – then goes back and explains with text and line art how each rope and knot is placed to achieve the final result.