[SubmissiveGuyComics has also done a ‘leash’ post for our NaBloWriMo project]

It was still early, all of us in black, seated around the table. Our appearance might have seemed gothically funereal except for the fact that we were at an Italian restaurant: eating pizza, drinking wine, talking, laughing.

My boy was sitting beside me, young, shy, nervous. Quiet. He wasn’t really mine. Not really. But for the purposes of public consumption, on this night he belonged to me. He wore my collar of simple leather, a silver clip connecting the D-ring to the chain that fell down from his neck, ending in a the leather loop that sat casually in his lap.

He caught my glance, smiled hesitantly at me. At 6’3, he was gangly and awkward with himself. He would grow into his height, I was sure. But for the moment, he was all lean length and long limbs that he couldn’t quite figure out what to do with. I smiled back, knew he would shrink into himself if I left him there on his own.

I wondered if I dared walk with him on his leash through the street. I looked around. It was not yet late enough for aggressive drunks or belligerent busy bodies. I saw happy people looking forward to a night out and enough wild originality in costume to make us just more bodies in the street.

My boy stood up also. I smiled, patted his chest and picked up the chain. I ran my fingers down the cool links and hooked a finger into the leather hoop as I stepped away from the table.

I walked out of the restaurant and headed confidently towards the banks, high heeled boots clicking on the concrete. He followed, a quick shuffle to match my stride. We were almost equal in height which made us a formidable couple, but I felt as if I were leading a baby giraffe: His gait was awkward as he tried to keep in step with me, to stay close. The leash was only visible as the gap between us increased, so he tried to stay by my side so that it was less obvious. I ignored his self consciousness over the fact that we were connected by it, chatting to him about how he was feeling about the evening, his first with this crowd, he had been nervous.

I watched people around us in case anyone was paying us undue attention, but everyone was involved with themselves and there was no more than a curious stare or two by people who had spotted his collar and the chain between us. I caught one man’s eye, smiled, watched his eyes skitter away at the same time his mouth curled up, embarrassed to have been caught.

At the ATM, he hovered close, careful to turn his back to me while I punched in numbers. I was done quickly, took two steps away before I realised he hadn’t moved, distracted, staring at a screen in the bar across the street. I gave the leash a quick jerk, he snapped back and quickly came back to my side.

“Sorry Ma’am.” His hands fluttered in the air like jittery birds. He hated having to be corrected.

I pulled on the leash to bring him nose to nose with me.

I jerked the leash again just for fun and strode off.

Too cute to be without a collar… 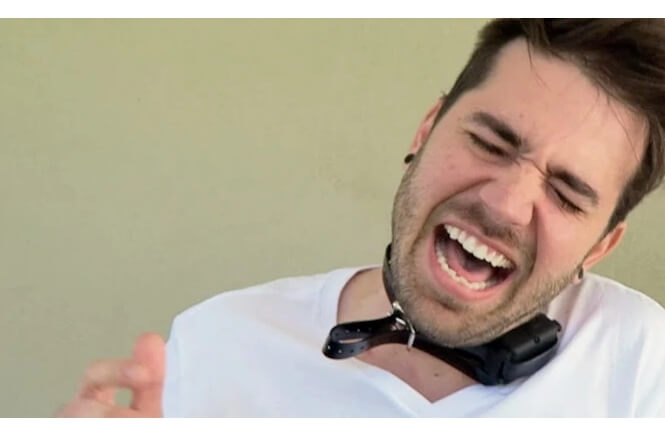 'Man in shock collar' by tmaasjost