I’ve had an idea and I want to see how it flies. 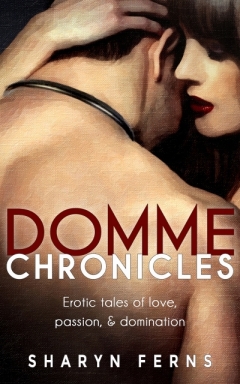 My Domme Chronicles book has been out for nearly a year now (I know, that’s AGES!!). It’s selling, but it’s hardly setting the world on fire. This is not surprising to me: I’ve done no marketing because I don’t have the appetite for that sort of self promotion, so any sales have been pretty much word-of-mouth. So I was mulling over how to make it more accessible while studiously ignoring that marketing elephant in the room.

As far as e-books go, mine is at a pretty premium price at about $5.99. It has some 460+ pages of content, so it’s pretty hefty, but still. I know that a lot of you have bought it (thank you so much!! *smile*), but I also think that a lot of people are hesitant to spend that much on an e-book, and fair enough.

On my path to converting everyone to femdommery and ensuring world domination, this is a barrier.

So, I’ve had this cunning plan to keep the original as-is, but to also re-release the content in three smaller, cheaper volumes of about 150 pages each. Most authors do it the other way (release a number of volumes, then do a ‘Collected Works’), but I’m hardly conventional.

So on the e-shelf would be:

I’d like to gauge interest in the idea, so I’d appreciate it if you could let me know what you think (ooh look, a poll!):

And of course I’d appreciate hearing your further thoughts in the comments.