Lovely young submissive man shyly enters the fray. Goes bravely to a munch, as per the advice of many. What happens next? Well, he has kindly shared it with us. Read on!

I read a comment somewhere, by someone, that there aren’t enough stories on the Internet about how D/s relationships start, so I thought I’d share my experience.

I’ve had “kinky” thoughts basically for as long as I’ve had sexual thoughts. It wasn’t until last summer, at age 28, that I decided to actually pursue kink. After some searching around online, I found the most common advice was, “Get on FetLife and go to a munch.” So that’s what I did. I joined FetLife and found a semi-local (I live in a very rural part of the U.S., so it’s a little bit of a drive) munch to go to. In the meanwhile, I came to the conclusion that if I am kinky (spoiler alert: I am), it’s as a submissive, but not of the groveling, worthless-worm stereotype. I want love, tenderness, and affection, but I want them from someone who is in charge.

I actually started with a smaller, more casual munch before going to the big organized one in the city. It was a great idea, because the big munch would have been a bit overwhelming if there weren’t any familiar faces. When I went to the big munch, I saw one of the sexiest women I’d ever seen in person – physically attractive, yes, but also in her style, confidence, and the way she carried herself. I learned that it was her first time at the munch, too, when they asked first-timers to identify themselves. I was really surprised; she looked completely at ease (I later learned that she had recently moved to the city after being involved in the scene elsewhere). I didn’t work up the courage to talk with her, though. The next month, I went to my first dungeon play party, just to get a sense of what they are like. I watched a couple of scenes and chatted with some people (away from the area where scenes were going on – idle chatter can really disrupt a good headspace) before going home.

When the next month’s party came around, I had plans to play for the first time: cropping on my back, butt, and legs with a domme I had gotten acquainted with. It was enjoyable and reinforced the idea that this is something I could do. The beautiful woman from the munch (let’s call her “D”) was there, too, and did a couple of scenes. Neither of us saw the other’s scenes, but we ended up chatting in the changing room afterwards (the paddle I’d brought as a conversation starter worked wonderfully as a conversation starter) and then on the smoking porch, although I don’t smoke. It was a nice conversation and we traded FetLife contact information.

That week we talked a bit online, and I invited her to the smaller munch that was coming up. It wasn’t a date, strictly speaking – she didn’t commit to join me, and I didn’t ask her as a date – but we ended up sitting together and chatting most of the evening without much regard for the overall topics of conversation. When I told her I had found a needle scene at my first play party fascinating, her face lit up with joy. We spent a couple more weeks getting to know each other through chats online, and decided we would like to play at a smaller party later in the month. It turns out that she is a switch, and our kinks are fairly well compatible. We made our plans, which were more of a rough framework than a point-by-point plan. I would be blindfolded and tied down on a bed, and she would try a variety of things from her toy bag to see how I reacted to different sensations. It went really well, I learned some things that I really, really like, and there were only a couple of things I would prefer not to try again, and nothing that I would absolutely say no to. I had a very nice time with a cool-down of cuddling before she went off to get ready for a scene where she would be bottoming.

We continued chatting, playing as time and distance would allow, and soon enough you could probably say that we were at least dating. About the same time, I got an email from her saying that from reading my cues, as well as things I had written, she felt I was ready to move from bottoming to submission. I was thrilled when I read her email. We had been (and really still are) pacing ourselves because of my newness. It has paid off, because I’m comfortable with her and trust her enough to do things that make me nervous (like the previously mentioned needles), and she has become good at reading my reactions. By that time, I really felt ready to hand over the reins to her. In March, about four months after our first time playing together, we addressed the elephant in t he room, our relationship had definitely become a “relationship” of some sort, and we wanted to be able to put into words what it is. For lack of better terminology, we settled on the basic default of dominant and submissive. I say for lack of better terminology because I don’t feel like the common terminology in D/s circles has the right nuance. I don’t think most D/s terminology has enough connotation of affection, and the labels that do have a particular connotation of affection carry other associations that aren’t quite right to describe our relationship (“little”-based terms come to mind here).

Anyway, now we’re saying that she is my dominant and I am her submissive. But it feels like more of an acknowledgement of what was already there than a change in our relationship. Oh, I’m doing more service for her, but I think that’s because we’re spending more time together, and we can’t fill all of that time with play. I don’t consider myself service-oriented, but I like doing things for her and making her happy.

The things we do together haven’t changed wholesale since we labeled our relationship, which is nice, because I really enjoy the things we do together. There has been a little bit of a change in how we do those things, or rather how we talk about and decide what to do and when to do it. There is less of her asking if I’m interested in something and more of her telling me what is going to happen, but I don’t know whether that can be traced to the acknowledgement of our dynamic or the fact that she has had time to learn what I’m interested in, but I like it.

During a break for cuddling in a recent bout of play, D held me tight and whispered, “Mine. All mine.” It was relaxing and heartwarming to hear from her. A little later, she explained what she meant by it, that she knows I would happily give her any part of me that she asked for. She is absolutely right. My desires, my fears, my sweetness, my sincerity, my insecurities, my love – I’ll give them all to her whenever she wants.

I could have lived all my life and not found someone so wonderful. I know how lucky I am, I feel like I won the lottery. I don’t know what the future might bring, but now I know that I am hers, I love her, and she loves me. That is all I need to know.

My happy femdom story is also a bit of a happy polyamory story. D switches and is polyamorous. Poly is something I’d never given any thought. Early on, when she went from cuddling with me after a scene to getting ready to bottom to someone, I had certain feelings of discomfort. Those feelings have dissipated over time, though, and as I’ve gotten to know some of her other partners, I’ve become a lot more comfortable with it. I really felt like I’d made a breakthrough when she told me that a couple she is interested in asked her if she would be their girlfriend – I was actually happy and excited for her. It probably helped that I know and like the couple, and it definitely helped that I feel a lot more secure in what I mean to D and what our relationship is.

I’m still getting used to the idea that she wants me to play with and be romantic with other people, though. When she says I’m hers, it isn’t about exclusivity. She wants me to be involved with others as a preventative measure against jealousy and resentment over her other partners. So I’ve continued playing with a couple of other people, but it feels a little bit awkward. I’m working on it, though. 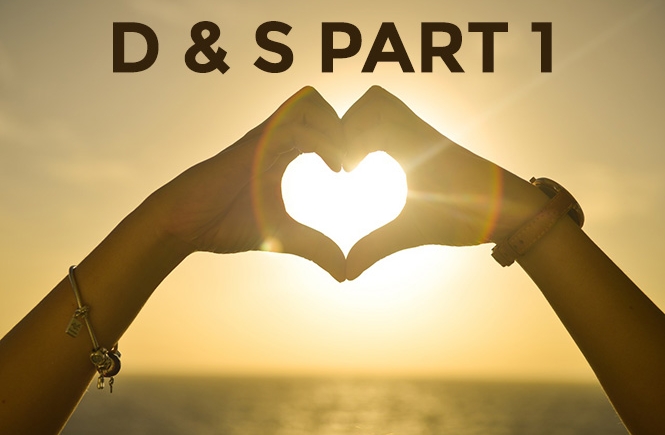