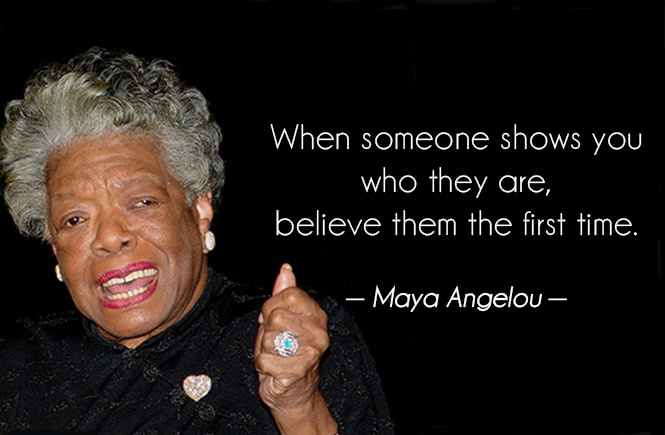 When someone shows you who they are, believe them the first time.
— Maya Angelou

This is a timeless quote. I wholeheartedly believe in it.

I sometimes have interactions with potential partners, submissive men, natch, who do something egregious early on in our correspondence.

I know it sounds harsh, and it is.

If someone lies to me, is disrespectful, is mean, ignores my boundaries, expresses some offensive view, is shitty in some way, I believe it is exactly what it is. There’s no ‘there’ there, no secret to uncover. It is what it is.

Ditto if their response to me behaving in a way they don’t like is some passive-aggressive (or aggressive-aggressive) version of ‘No, little lady, not like that’ (that’s the point, normally, where I turn from someone ‘ah-mazing’ into ‘a wrong ‘un’).

I don’t subscribe to the idea that it was a mistake, or a lapse of judgement.

I genuinely believe that I am getting a glimpse into ‘who they are’. I see it, and I believe them.

If I say nothing about their behaviour, they’ve drawn a line in the sand about how they can treat me.

If I say something, often they double-down.

Sometimes they say they are sorry, have an excuse, an explanation.

99.9% of the time in the latter case, what they say to defend their behaviour is some version of ‘That’s not who I am, I’m not really like that’, and that’s… not credible to me.

0.1% of the time, there is a genuine misunderstanding, but it’s not the norm.

There is no better time to get the measure of a man than early on when he isn’t really invested, is still gauging his interest, when he’s getting my measure.

If he behaves poorly towards me, it’s because he thinks he can, and THAT’S 100% who he is.

You’ve shown me who you are, and you better bet I’m going to believe you the first time.

'Do not fear failure' by Tomasz Stasiuk